How to Roast, Puree, and Freeze a Pumpkin 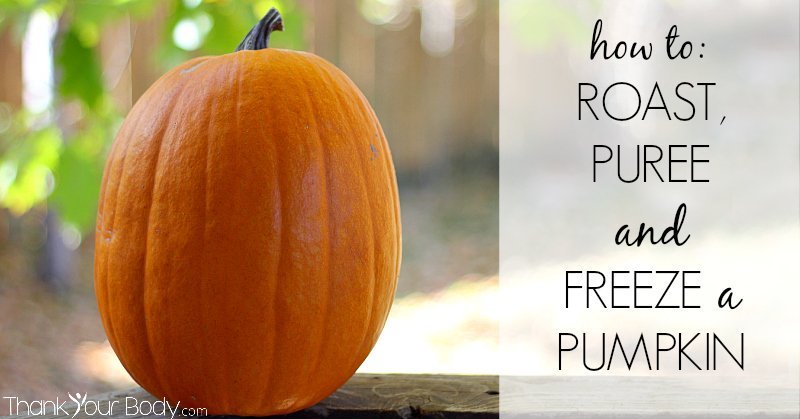 We’re seeing pumpkins everywhere this week! Most of them look more spooky than delicious. But pumpkin is such a wonderful thing to cook with! It’s amazing in baked goods and treats (like these Pumpkin Cream Cheese Bars) and it’s also tasty in savory dishes….like pumpkin soup. You can substitute pumpkin for squash in recipes that call for winter squash, and it makes a nice side dish. You could buy your pumpkin in a can, but if you time it right you can also pick up a whole lot of pumpkin for next to nothing! All the spiced pumpkin lattes, pumpkin bread, pumpkin chocolate chip cookies, and warm pumpkin soup you can eat. And prepared right at home in your own kitchen!

Here’s the deal: Stores stock up on pumpkins before Halloween. They’re at a premium all through October…but what happens November first? Mounds of pumpkins that nobody wants. Most stores know that the day after Halloween they can’t give pumpkins away, much less sell them. So you may not see pumpkins lying around under a discount sign. But, if you go in the day before and talk to the person in charge of produce at your favorite grocery store, there’s a very good chance that he or she can set aside some pumpkins for you to buy the next day for cheap. One year, I managed to get three pumpkins and a giant Hubbard squash for free!

There are several types of pumpkins, and some are better than others for baking. Pie pumpkins are smaller and rounder than the type that people buy for Jack-O-Lanterns, and have sweeter flesh. However, plain old Jack-O-Lantern pumpkins are still quite tasty, and if you’re pinching pennies there’s no reason why you can’t make pies, soups and breads out of them. The only real consideration is that you’ll want to make sure that if you cut it in half, your pumpkin will fit in your oven! 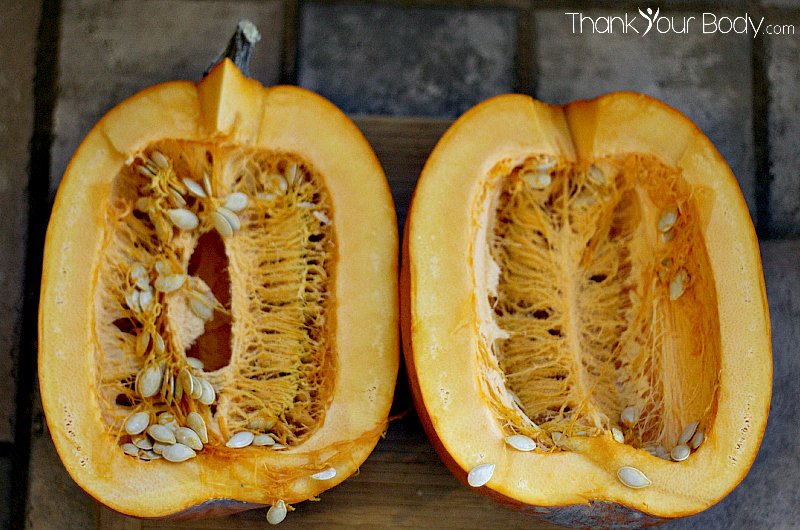 Once you’ve got your pumpkin, wash the outside. Then, cut it in half lengthwise…this can be a tough job, and I always feel a bit odd sawing through a giant squash with the biggest knife I can find. You’ll get two halves of pumpkin, hollow in the middle with a lot of strings and seeds. Scoop out the seeds…I use my hands for this. It’s going to be sticky! Pull the strings from the seeds and put them in a strainer, and then wash them well as you separate and throw away any pumpkin stuck to them. Once they are clean, put them in a bowl of salt water and let them soak as you roast the pumpkin…you’ll be able to roast the seeds next for a healthy, tasty snack! 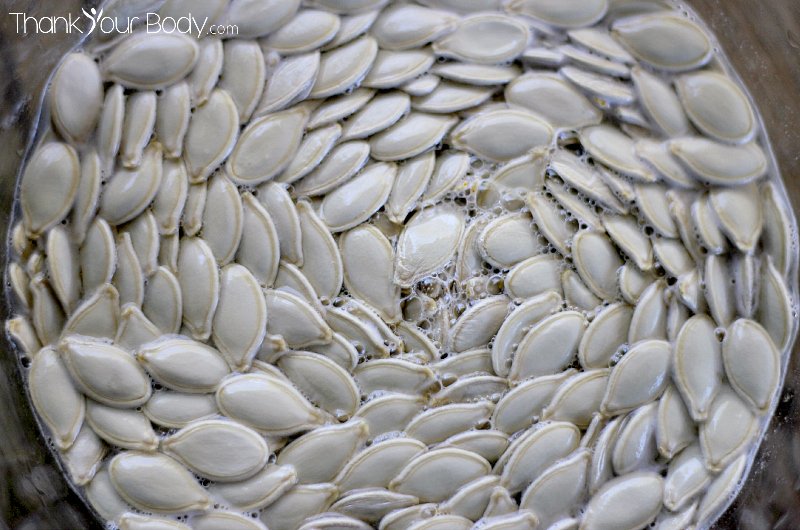 Now, scrape out the pumpkin halves with a metal spoon. You want to remove all the stringy stuff (which won’t cook or puree well) and leave just the flesh of the pumpkin…it takes a little practice, but if you’ve ever carved a pumpkin before you already know what to do. It’s even easier, because you don’t have to put your whole arm into a slimy pumpkin and awkwardly scrape it through a tiny hole on top! 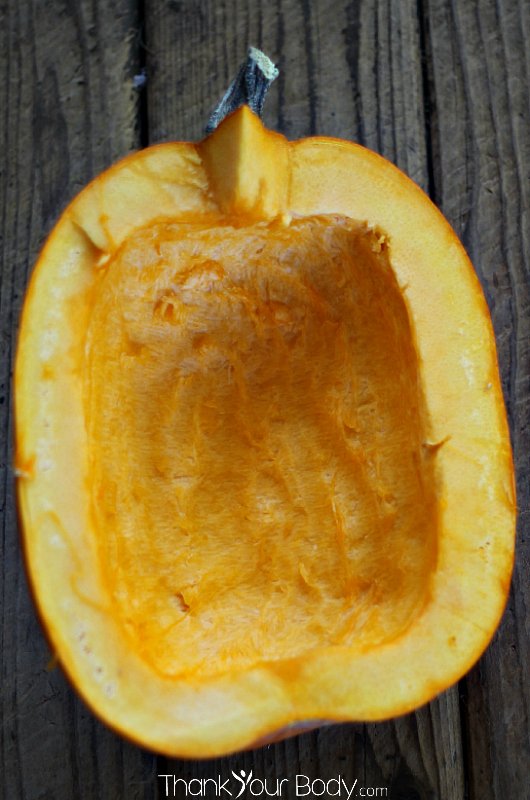 Once your pumpkin halves are clean, place them cut side down on a baking sheet. Poke some holes in top of each half, and put them in the oven at 350 degrees for 45 to 60 minutes, or until the pumpkins are tender (use a fork to check). The skin will be bubbly and browned, and cracked in places. Remove the pumpkin from the oven and set it aside to cool.

As it cools, prepare and roast your pumpkin seeds! This is a favorite treat in my family, so everyone is always glad to see an extra pumpkin or two show up in the grocery basket after Halloween. Just arrange the pumpkin seeds on a baking sheet (I lined mine with parchment). Pop them in the oven at 300 degrees for about 45 minutes, or until they are dry and slightly browned. There are many ways to go fancier on this, and if you have a favorite method go for it (and, while you’re at it, maybe share it with us in the comments). 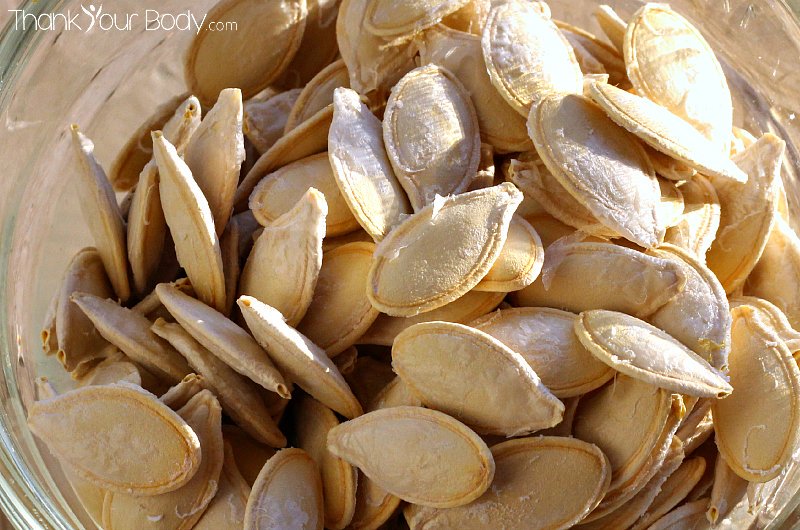 Once the pumpkin is cool enough to handle, use a paring knife to peel away the skin. It comes off easily, so this is a quick job! Cut out the stem areas, and then cut the soft pumpkin into chunks. Run these through the food processor to puree them…you might find that you have to stop now and then and stir it to make sure that all the chunks get pureed. 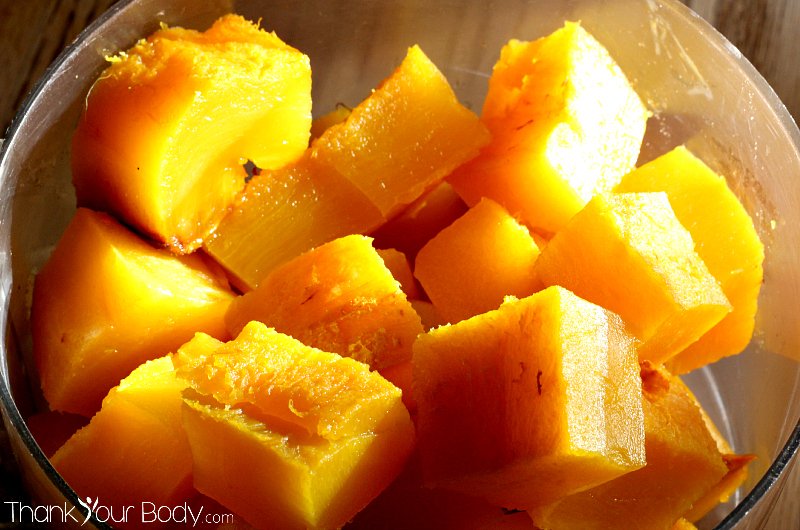 Measure the pumpkin puree into zip bags…you can use small bags with 2 cups or so of pumpkin in each, or you can use large freezer bags and put in 8 cups. Then, remove as much air as you can from the bag and use your finger to score the puree into four equal parts. Once the bags are frozen, you can break off a piece of frozen pumpkin and know that each square is roughly 2 cups of puree. 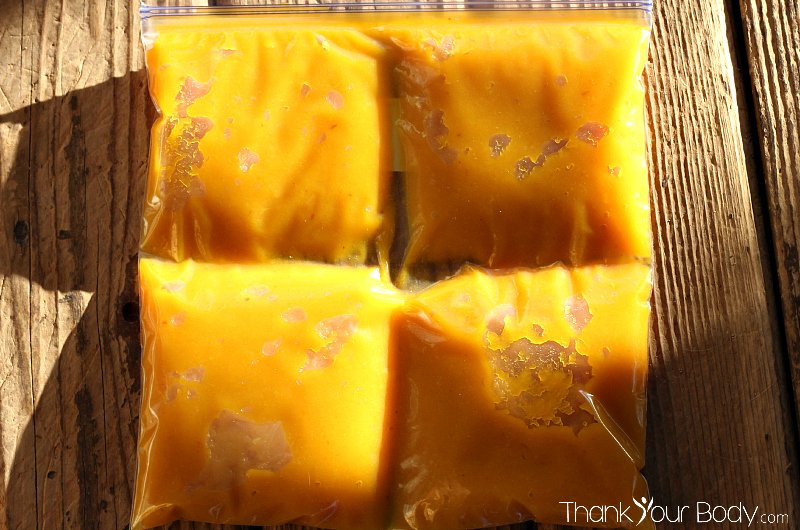 That’s all there is to it! A simple, very inexpensive way to stock up on healthy pumpkin for the year. Thanksgiving is going to be here before we know it, and it’s lots of fun to serve pumpkin pies made with your very own pumpkin puree! 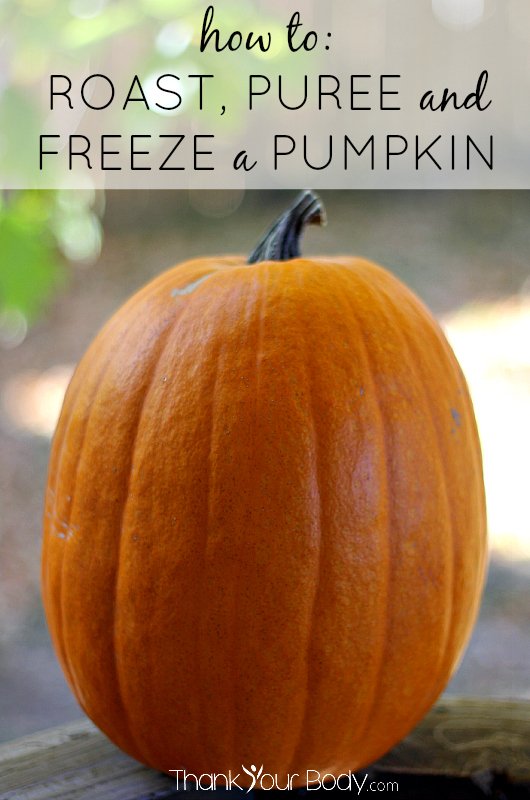 Share your favorite pumpkin seed recipe in the comments below!