My Home Birth with Baby D 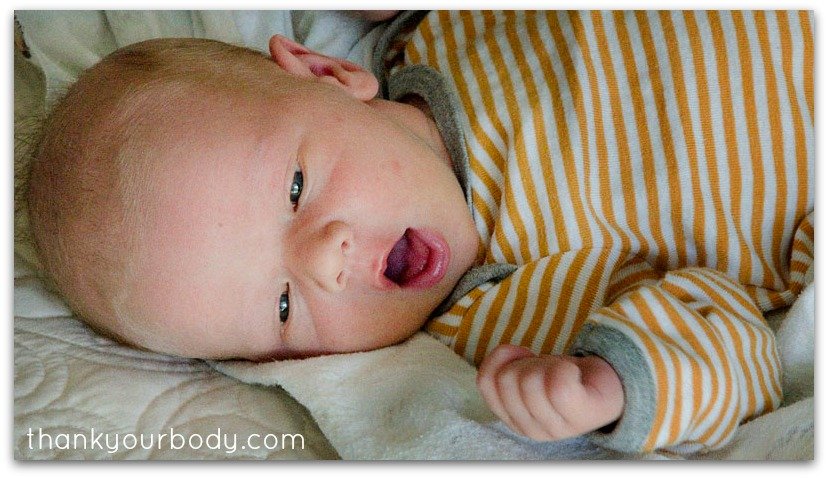 One month ago, at exactly 12:00 A.M. our home was blessed with the arrival of our second child. This is his story.

Like so many good stories, however, his story actually begins with his older sister’s story. During my first pregnancy I stuffed my brains full of information about birth, breast feeding, midwives, and the like. Having taken a break from teaching, I suddenly found myself with more free time than I had ever had in my life. So I read a lot. I walked a lot. I did a lot of yoga. I was full-on in “baby mode” for those nine months.

But despite my diligence to “be ready” for the coming of that little babe, my labor was an intense and long 30+ hours that ended in a hospital transfer. Despite things veering off “the plan,” her birth was an important lesson and a beautiful event. (You can read all about that birth here). 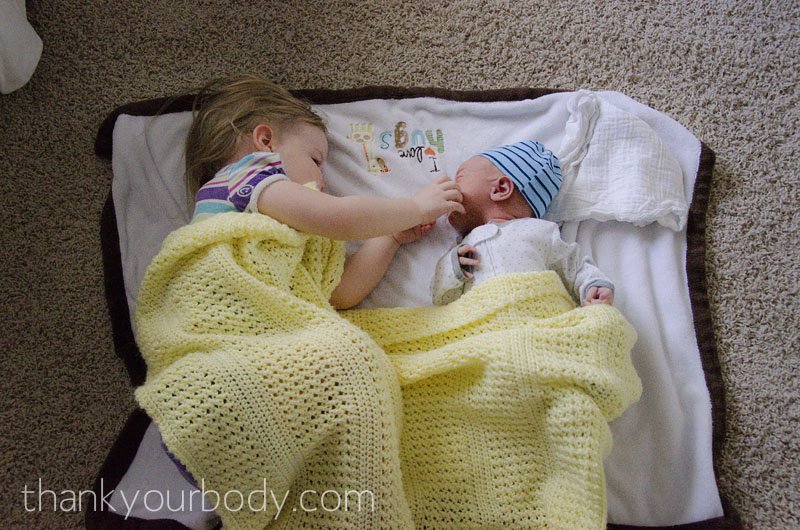 This pregnancy was different from the beginning. I was busy, tired, and eager to “just be done” with the whole thing. (Sad, I know… and not something I’m proud of.) I didn’t pick up a single pregnancy book. I didn’t spend hours online researching natural birth. After everything “going wrong” the first time, I decided to just go with the flow. Besides, unlike last time, I was busier than ever.

Our family moved when I was 37 weeks pregnant. Trying to find renters for our condo while gearing up for the move was stressful to say the least. Unlike last time, I hoped the baby would stay put for a while. I wasn’t mentally prepared for labor. I was tired from moving, tired from our little girl who was consistently waking up at 5 A.M. each morning, and secretly terrified of having to endure another long birth.

I was one day shy of my 39 week mark. We had just finished lunch and were battling our little girl down for a nap… again. While I had been having contractions for several weeks, I noticed that they were starting to feel more “crampy.” Without mentioning anything to Tom, I downloaded an app for my phone and started casually monitoring contractions. 15 minutes apart. 10 minutes. 5 minutes. 8 minutes. 20 minutes. 5 minutes….  I began worrying as the inconsistency in the timing was just like last time.

It was getting later in the afternoon and I worried that I wouldn’t be able to sleep through these contractions. I finally told my husband that things *might* be starting up. I also told him that I hoped the contractions would fizzle out and start again in the morning. I just wanted to sleep that night.

So we went to dinner hoping things would taper off.

In the process of getting our little C Monkey ready to leave, the contractions died down a little. It gave me hope that things would settle down for the night. But by the time we got to the restaurant, the contractions were back… although still inconsistent in their timing.

We got home, put C to bed and debated about calling the midwife, Sherri. Last time these contractions went on for nearly a full 24 hours before they became “serious.” But my amazing midwife told me early on that she wanted to be in the know. “We’re best friends. Keep me in the loop,” was her reminder.

Tom called her and gave her an update. Her advice: Take a warm bath and call her if things changed or progressed. I hopped into my tub… which gave a little relief, but not much. The contractions were getting more and more painful, but not really getting closer and closer in time. Tom called Sherri and she was on her way.

Just like last time I was feeling restless in the tub. I got out and changed into some “birthing clothes” and lied down on the floor in the living room. Tom came up and snuggled behind me, holding my hand and giving me some pressure on my back each time a contraction came. I began to cry a little… I was trying to mentally prepare myself for a long night, but was feeling a little deflated by the idea of another long labor. I was just so tired even before the contractions came. (My advice: Don’t move just before giving birth.)

It took Sherri a while to show up due to construction traffic. She arrived around 10 P.M., just in time for another contraction. She and Tom applied pressure point assistant which was AMAZING. Seriously, it relieved about 90% of the pain I was feeling. It gave me hope that I could do this. (It also made me wish Sherri had been there at my first birth. She was amazing.) 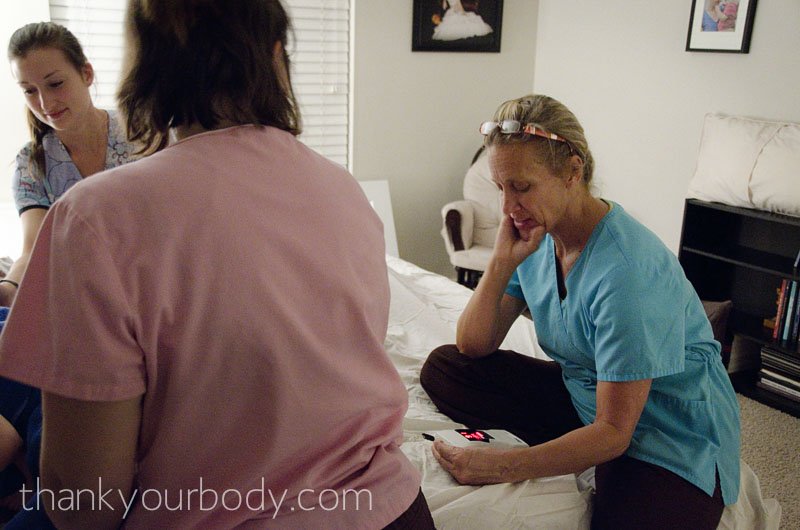 After that contraction Sherri asked if she could check my progress. I consented and prepared myself to hear something depressing like, “You’re at a 2.”

What!? In an earlier prenatal visit Sherri had told me that was her code for saying, “We need to get everyone here because you are ready to go!”

I was at a 10. I was ready to go. Immediately I found myself relieved, full of energy, hopeful, happy, and thankful. A ten. Maybe this birth would be different than last time.

It was the shift I needed.

I’m amazed how a tiny little sentence can change everything. Despite the fact that I had come to terms with my first birth, it wasn’t until that moment when Sherri said I was ready to go that I realized how much fear was still inside of me. Sure, I made it through my little girl’s birth. She made it. We were both happy and healthy. But the experience left a scar that didn’t reveal itself until just now. I feared another transfer. I feared something would go wrong. I feared being even more exhausted and that I wouldn’t be able to be the kind of mom I want to be.

I was not doing this thing alone.

I was surrounded by skilled and loving midwives. I had my wonderful husband supporting me. I had a baby inside that was doing his part. And, as always, I had a loving Heavenly Father who was guiding the whole process.

With Sherri’s declaration that I was ready to go things moved quickly. She called the other midwife and student. They were at the home within a short time. I began pushing. It was a relief, and it was painful. I started on my side, moved to a birthing stool, and finally ended on my hands and knees. Despite the pain, he was progressing (such a relief after C’s birth!). And at exactly 12:00 A.M. on August 3rd, after about 4 1/2 hours of labor, our little Baby D was born. Unlike his older sister his umbilical cord was long. He was placed on my chest.

No transfer. No vacuums. No quickly cut cords. 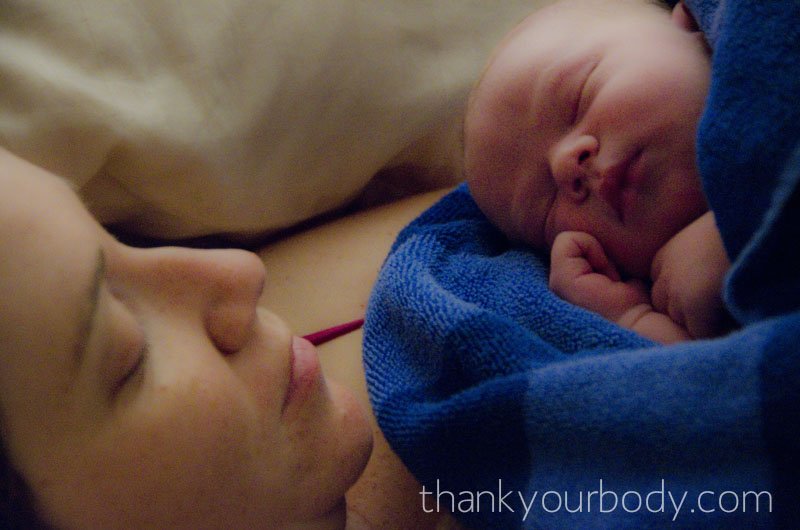 Unfortunately, I did tear pretty badly… although in my head I was mentally prepared for that since I tore last time. It took a while to get stitched up, but I was in heaven. I was thrilled to hold this beautiful baby in my arms. I was thankful he was perfectly healthy.

Almost everything was different.

This pregnancy was a lot harder than my first… (which I blame mostly on too much stress). And almost everything was different about the birth, too. But the love, awe, and gratitude that I felt when it was done was the same. Love for this new baby. Awe for what the body can do. And gratitude for the helping hands that helped bring him into the world. 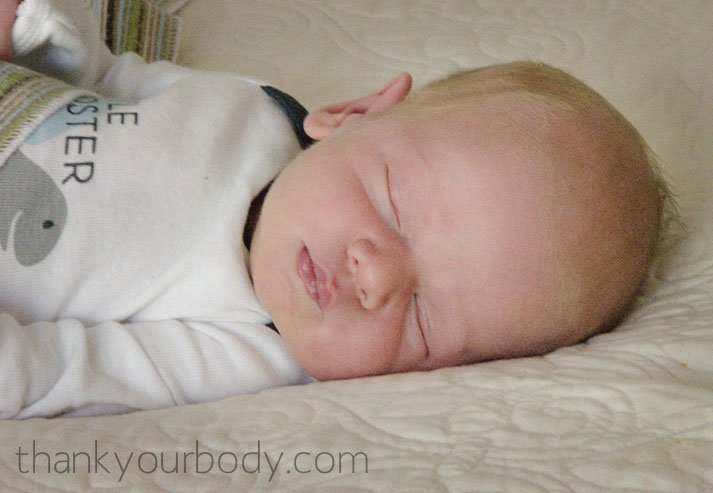