When we think about foods to avoid most of us will quickly come up with a list that includes things like: candy, doughnuts, soda, and other “junk food.” These are the easy foods to try and keep out of your diet. Unfortunately, our marketing saavy world has promoted certain foods as health foods, despite their ugly reality. So with that in mind, I’d like to talk about some specific health foods to avoid.

Soy has been promoted as a health food for a long time. For vegetarians it is marketed as a source of protein. Many sources have asserted that Asians have been eating lots of soy for millennia. However, the real story behind soy paints a much different picture.

Why you should avoid soy:

To top this horrific list off, 91% of all soy grown in the U.S. is genetically modified. It is also one of the prevalent ingredients in processed foods. If your food has a barcode, there’s a good chance there is soy in it.

How does this information stand against Asian populations who have been eating soy for so long? Well, according to the extensively researched book, The whole soy story: the dark side of America’s favorite health food by Dr. Kaayla Daniel, the Chinese first started eating soybeans about 2,500 years ago, but only after they figured out how to ferment it. The fermentation process neutralizes the toxins in the soybean. Tempeh, miso, natto, and soy sauce have traditionally been fermented (although most soy sauce in the grocery store has not). Most soy Americans consume, however, is not fermented. We are also consuming more of it than ever before.  (Learn more about the dangers of soy at drkaayladaniel.com and wholesoystory.com.)

In other words, soy is definitely one of the health foods to avoid. 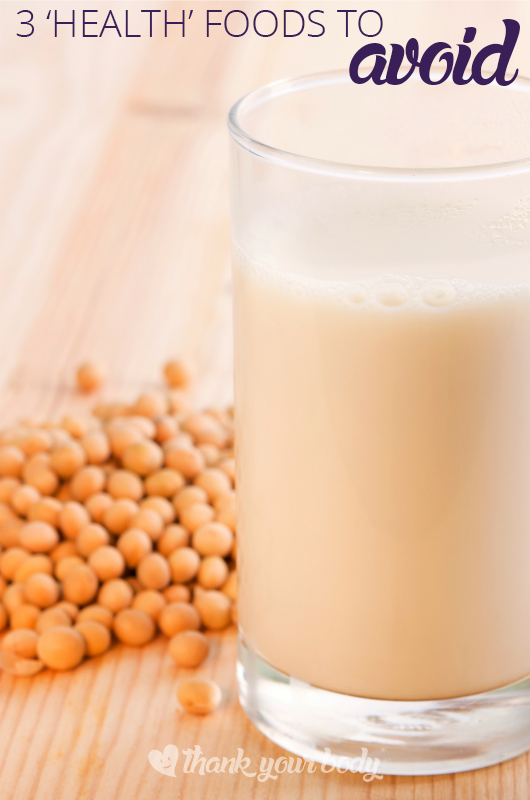 This sweetener has been all the buzz the past few years. Prized as a “low glycemic” miracle, many health conscious people have placed agave in their pantries with a sense of pride.

Why you should avoid agave nectar:

That’s not to say that having a teaspoon now and then will kill you. But if you are pouring the agave on your waffles thinking it’s a health food… sorry, it’s not. It’s just like all the other unnatural sweeteners, and should be used very sparingly. Better yet, when you need a little sweetness, go for some fresh fruit, raw honey, or organic maple syrup (grade B for more minerals!).

Promoted as a “heart healthy” oil, Canola oil is in everything from salad dressing to mayonnaise. No wonder people think it’s healthy. I finally convinced my mom to switch out her margarine for butter (yay!) only to find out she was buying the butter with canola oil. She was so proud of her healthy choice. After a few head bangs into the wall (me) and some discussion (me and her), she’s finally eating good ole’ plain real butter (YAY!).

Why you should avoid canola oil:

You are better off trusting traditional fats like butter, lard, coconut oil, and high quality extra virgin olive oil (although EVOO is still unstable under high heat so it shouldn’t be used for cooking). But when it comes to canola, and all vegetable oils for that matter, they are health foods to avoid. For sure.

There you have it. Three health foods to avoid because… well, turns out they aren’t healthy. At all.

What health foods do you avoid? My general rule of thumb: If it has to claim it’s healthy on its package, it often isn’t.

Canola oil sources
Real Food: What to eat and why by Nina Planck (“I am not convinced by canola”)
http://customers.hbci.com/~wenonah/new/canola.htm
http://butterbeliever.com/what-is-pufa/
http://www.rmhiherbal.org/review/2000-4.html