Why you should eat liver. (And how you can get over the “ick” factor). 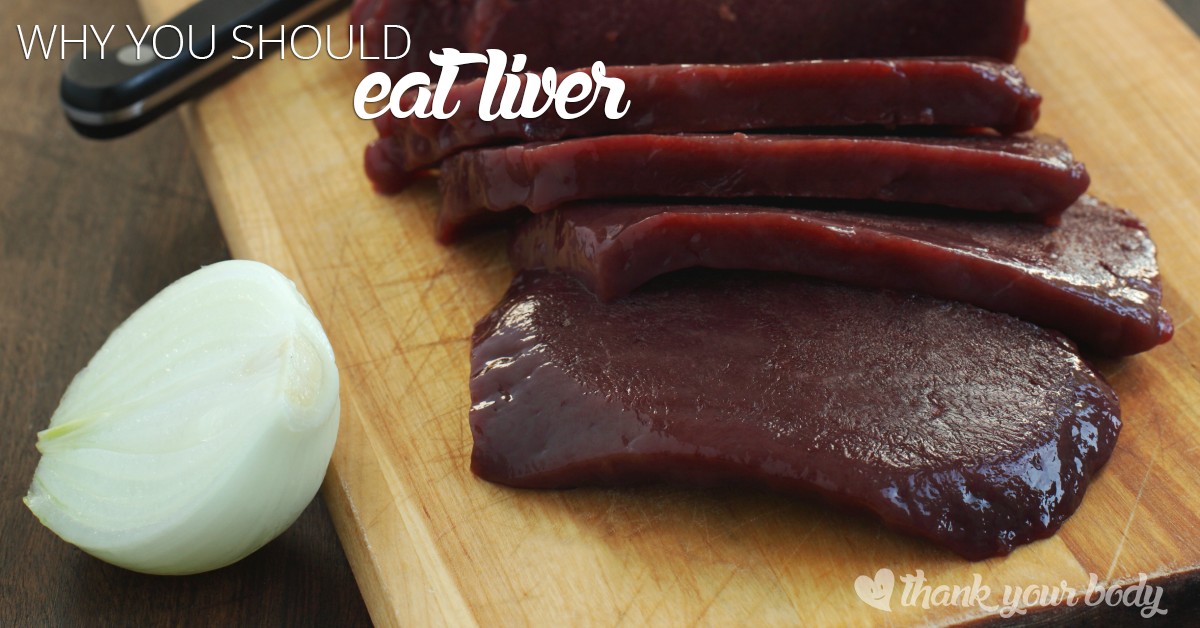 Eat liver!? Are you crazy!? If you had asked me five years ago if I would ever eat liver I’m pretty sure I would have said “no.”

In fact, in my head, eating liver was a bad idea. I mean, I took anatomy. I knew what the liver’s job was. Who would want to eat the organ that’s primary function is dealing with toxins. No thank you.

But like so many other things in my life, I’ve changed my thoughts about liver. In fact, I think liver is pretty super. Kind of like superman, but not as attractive.

Super Liver to the rescue!

Historically speaking liver has a long tradition of respect and honor. It’s been considered a super food to help the battling warrior, a delicacy throughout the world, and was once believed to have almost magical curative powers.

Well, gram for gram, liver contains more nutrients than any other food. In fact, liver provides:

This factor was described by Benjamin K. Ershoff, PhD, in a July 1951 article published in the Proceedings for the Society for Experimental Biology and Medicine. (source)

Here’s the Reader’s Digest version of the study:

The first ate a basic diet, fortified with 11 vitamins.

The second ate the same diet, along with an additional supply of vitamin B complex.

The third ate the original diet, but instead of vitamin B complex received 10 percent of rations as powdered liver.

After several weeks, the animals were placed one by one into a drum of cold water from which they could not climb out. They literally were forced to sink or swim. Rats in the first group swam for an average 13.3 minutes before giving up. The second group, which had the added fortifications of B vitamins, swam for an average of 13.4 minutes. Of the last group of rats, the ones receiving liver, three swam for 63, 83 and 87 minutes. The other nine rats in this group were still swimming vigorously at the end of two hours when the test was terminated. Something in the liver had prevented them from becoming exhausted. To this day scientists have not been able to pin a label on this anti-fatigue factor.

Putting aside the cruel animal testing (poor rats!), liver clearly has some super powers. So let’s all eat liver!

What about all those toxins?

As I mentioned early, one of the primary roles of the liver is to neutralize toxins. But the liver doesn’t store toxins, instead it stores a lot of powerful nutrients that the body uses against the toxins.

Keep in mind that the best liver comes from the best animals… those who were raised humanely and appropriately.  The best choice is liver from animals that spend their lives outdoors and on pasture. The next best choice is organic chicken, beef and calves liver. If you don’t have access to quality liver, and your local Walmart is your only option, try to find calves liver  as in the U.S. beef cattle do spend their first months on pasture. Livers from conventionally raised chicken and hogs are not recommended.

I hear you. Really, I do. I had read plenty of literature on the benefits of liver before I ever ventured out to buy some. And when I did it sat in my freezer for far too long.

Liver has a strong taste, to say the least. For many people it’s a familiar and delicious taste. But if you grew up on a Standard American Diet you may need a little help eating liver. Here is my easy method for getting more liver into your diet… without dealing with the flavor.

How to eat liver: A guide for beginners:

1. Thaw liver slightly. While still mostly frozen, cut liver into chunks. Like this: 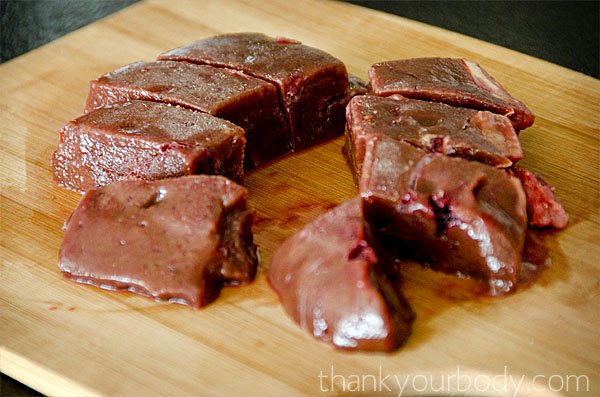 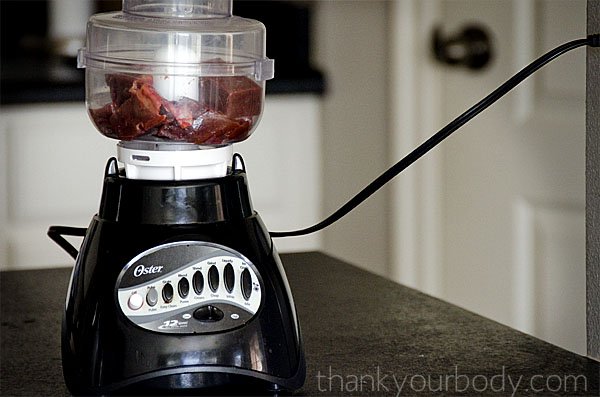 3. Process until it’s all gross and gooey. Like this: 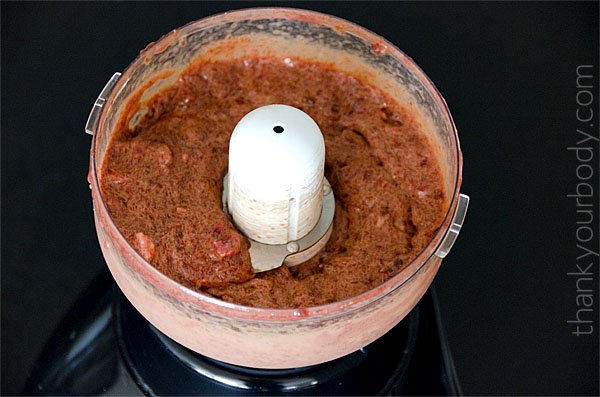 4. Scoop liquefied liver into an ice tray. Like this: 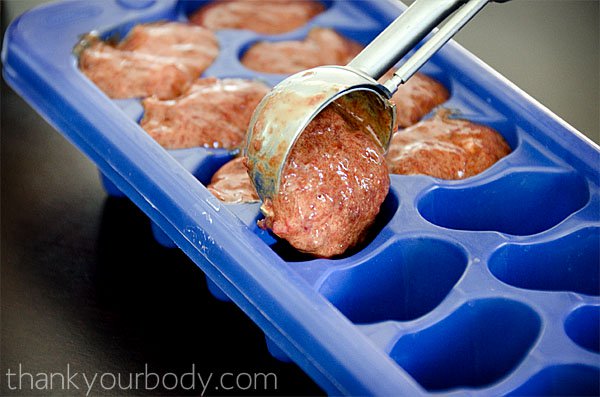 What to do with my liver cubes?

Next time you are cooking a meal that requires ground meat, simply throw in a cube or two of liver. Just brown it with the other meat. You don’t need to defrost these cubes either, as they are small enough to break up just fine frozen. (Awesome!)

It’s  best to hide liver in dishes with lots of spices and flavor. I can usually throw 2 or 3 cubes into our taco meat without anyone knowing a difference. Chili is another great place to use these cubes. Spaghetti with meat sauce. Etc. The possibilities are endless.

Start small… use one cube and see how it goes. If you can’t tell the liver is there, add another next time. Start by adding liver into one dish a week. See, It’s really not that hard to boost your nutritional profile.

Another option for the truly squeamish:

Grab a bottle of my favorite dissected liver capsules. This liver comes from grass-fed, pastured-raised cows. It’s a super easy way to boost your body with nourishing real food… no icky involved. Get them here.

Want to eat healthier, but confused by all the information out there? You’re not alone!

It took me years to figure out this whole “healthy” eating thing, and that’s because the world is full of confusing information. Every “expert” is telling us something different, and it seems our lists of “shoulds” and “should not” eats are changing faster than we can keep up with.

If you’re like me and wish there was a simple, stress-free approach to healthy living then you’re in the right place. My guide Processed Free will help you easily navigate real food no matter where you are on your path to healthier living. Click here to check it out. 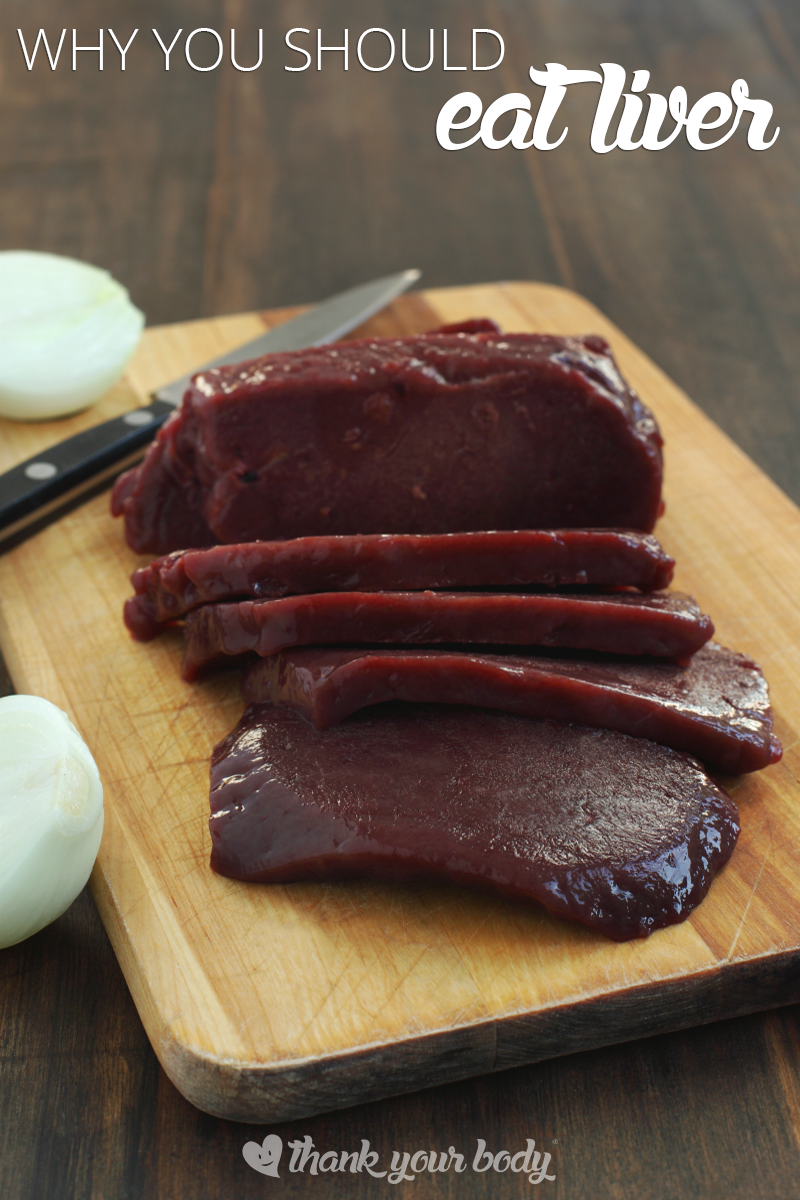