How bad is artificial food coloring? 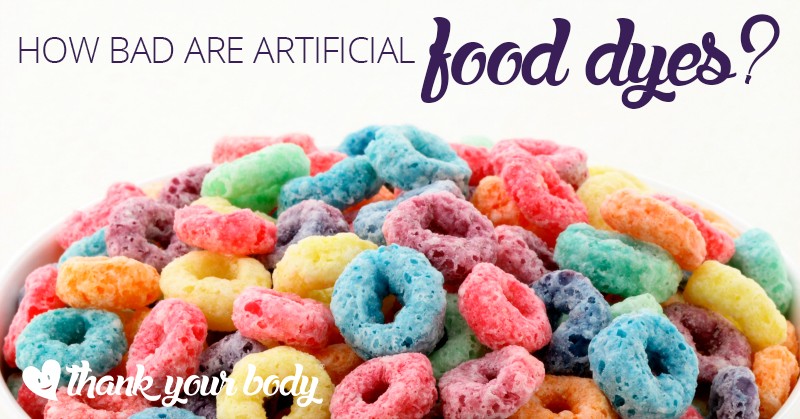 I grew up, like most American kids, with an array of breakfast cereals in my pantry. My personal favorite: Those fruity little loops of sugary delight. Seriously, I could eat a few bowls in one sitting and still want more. Now days you won’t find any cereal in our home. Which is okay since most are loaded with refined sugars, GMOs, and other less-than-healthy ingredients… including artificial food coloring. Not only are these artificial dyes linked to all sorts of bad things, did you know that they are banned in many countries?

Where is artificial food coloring lurking? 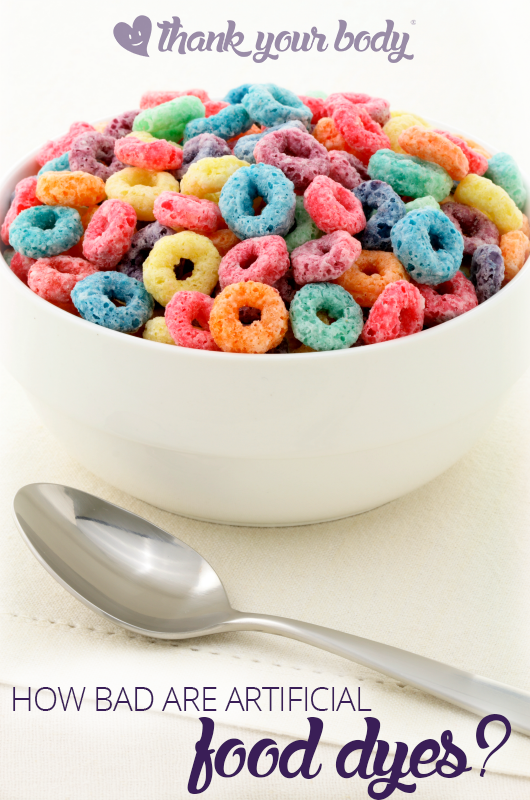 From cereals to candy, cake mixes to fruit punch, fruit snacks to macaroni and cheese… artificial food dyes are hard to avoid in the Standard American Diet. Consider some of these sneaky and surprising places you’ll may find these food dyes:

And of course there are the obvious culprits like candy, popsicles, and anything generally that sticks out as bright and unnatural.

Why are artificial food dyes dangerous?

Artificial dyes are made from chemicals derived from petroleum… the same stuff used to make gasoline, diesel fuel, asphalt, and tar. (Yum. Eat up, y’all.)

Artificial dyes have been linked to:

And that’s just the tip of the iceberg. No wonder Norway, Finland, Austria, France, and the U.K. have banned artificial food coloring. This is even more upsetting when you realize that U.S. brands like Kraft Macaroni and Cheese offer their products to our European counterparts without the dangerous food coloring.

What to look for:

Under the Pure Food and Drug Act (ironic name, right?) of 1906, seven dyes were initially approved for use.  But as major health concerns started popping up, several of those dyes have been banned. Sadly, replacements have been found.

Today only seven colors remain on the FDA’s approved list. Almost every decade, another coal tar issue surfaces, eliminating more and more of the artificial additives in America. For example, after Halloween in 1950, the government banned Orange #1 when many children became ill after consumption. In the 1970s, scientific testing pointed to Red #2’s potential carcinogenic properties (caused intestinal tumors in rats), and it too was banned. Yellows #1, #2, #3, and #4 are among the others that have since been made illegal, and Yellow #5 is currently undergoing further testing for links to hyperactivity, anxiety, migraines and cancer (the color has already been banned in many European countries). (source)

Despite the bad history, it seems the government is okay with using us as the subjects for their science experiments. As of 2007  the following seven artificial colorings are permitted in food (the most common in bold) in the United States:

The following dyes are only allowed by the FDA for specific limited applications:

Start reading labels like there is no tomorrow. Might get exhausting, but you may start to realize just how deep the problem goes.

And if you still want pretty colors, you can always try your hand at some natural food colorings. I love these ones.

Ultimately, the best way to avoid these dangerous food dyes is to stop buying processed foods and eat real food. It’s healthier. It’s tastier. And you’d be doing your kids a huge service.

Make your own sauces, popsicles, fruit snacks, juices, etc. It’s really not that hard and the benefits are worth it. Besides, we might just be able to send a message that we don’t want to be lab rats. We don’t need neon colored food. Just say “no.”

Not sure where to start?

Check out my ebook, Processed Free, for a stress-free guide to healthy eating.